Charlotte Chapel has been an evangelical Baptist church in the heart of Edinburgh for over two hundred years. It was founded on the teaching of the Bible and prayer. Here’s just a very brief outline of the history of our church so far:

The church was started in 1808 by a young Edinburgh businessman called Christopher Anderson, inspired by reports of William Carey’s missionary work in India.

The first meetings started in the Pleasance area of Edinburgh where there was no existing church. By 1816 it had out-grown its 350-seat building and the church moved to its current site. At this stage the church took on the name Charlotte Chapel due to its location next to Charlotte Square.

The original chapel building seated 750 and it was soon packed to overflowing. However, formal membership never rose above 130 before Anderson retired as pastor in 1851.

1859-60 were years of religious revival in Scotland. Charlotte Chapel shared in this revival and experienced another revival in 1873 when Moody and Sankey visited Edinburgh. Over this time numbers fluctuated widely as many Scots emigrated to London, the Americas and Australasia. 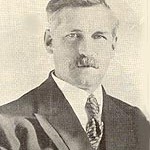 By 1901, membership had fallen to 108 and less than half of these attended regularly. When a financial offer for the building came from a local business the future of Charlotte Chapel was in doubt. However, a “faithful remnant” refused the offer and invited a young man from Hawick to become the pastor – Joseph Kemp.

Kemp called the congregation to prayer, cleaned up the building and held meetings in the open air in Princes Street where he invited passers by to join them. Membership increased slowly at first and then, in 1905/6, a revival once more swept the church and more than one thousand were converted.

By 1907 the congregation realised how inadequate the old building had become and drew up plans for a new one on the same site. The building was finished in 1912 once the cost of £7,250 had been raised. The only significant alteration to the 1912 development has been the creation of the present Lounge at street level in 1982.

Today Charlotte Chapel is a vibrant, diverse and thriving church. On Sundays we have a morning congregation of around 600 with 200 attending in the evening and our week is a blizzard of activities for various groups.

Charlotte Chapel is now worshipping at Shandwick Place which will make us more accessible, more visible, and ready to grow further.

To celebrate the bicentenary of Charlotte Chapel in 2008 a substantial book covering the history of the church was published. Copies of “Revival in Rose Street” by Mr Ian Balfour are available from the church office for the price of postage (approx £10 UK or £15 out with).  It is also available online at http://www.IanBalfour.co.uk in two formats, the full version and a Scholarly edition of Charlotte Chapel History, which excludes photographs